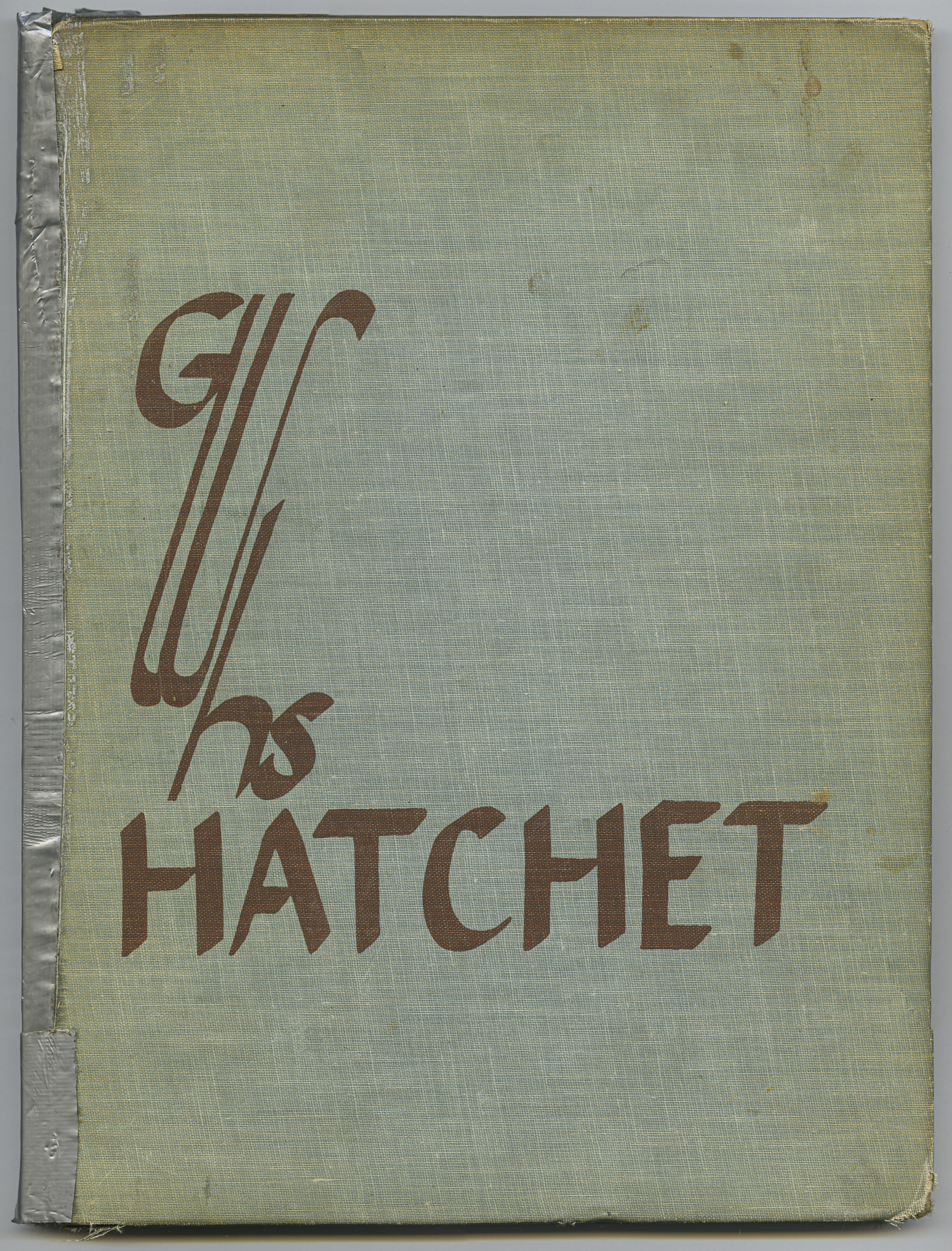 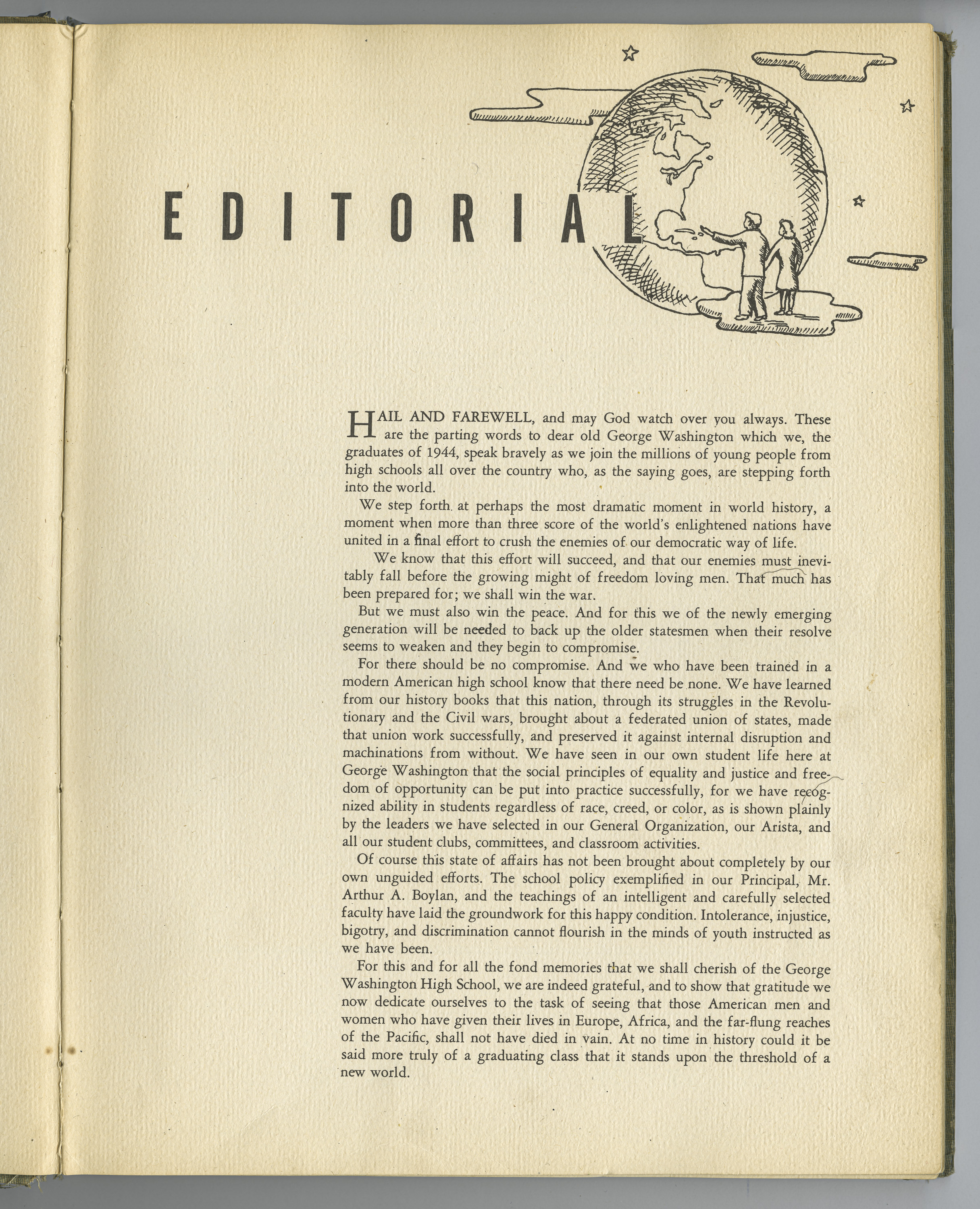 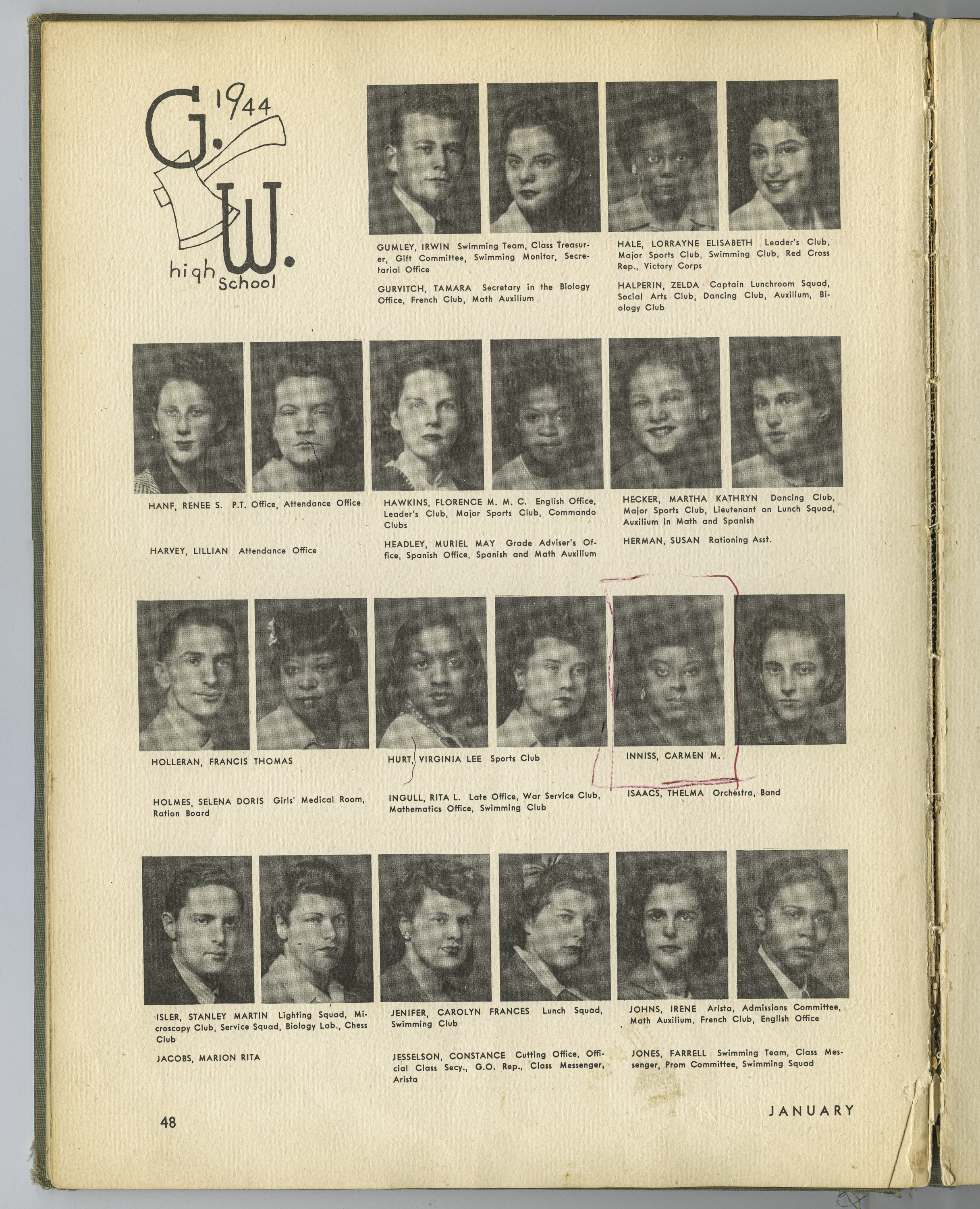 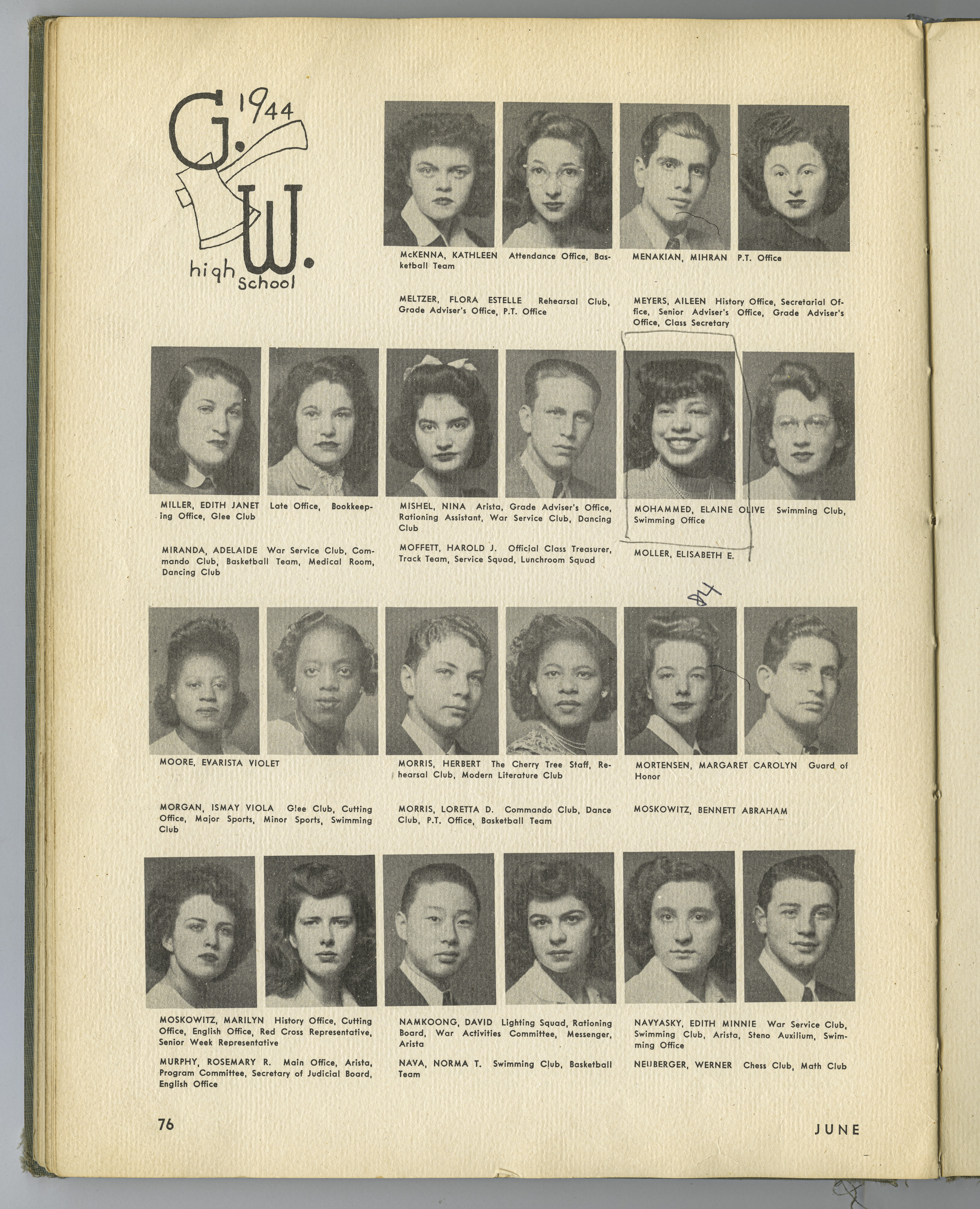 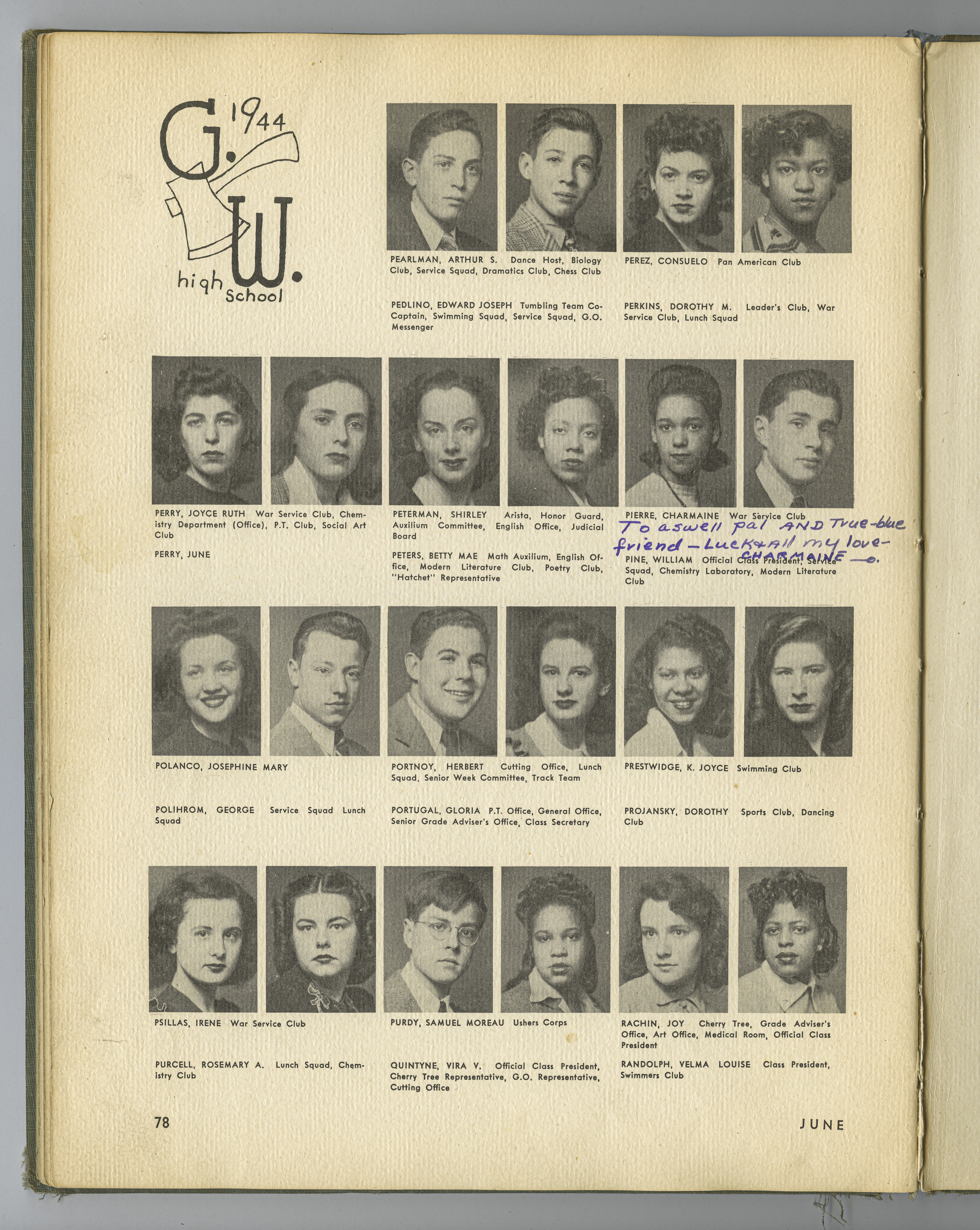 Notes: Umi’s mother graduated from George Washington High School in 1944, during the final years of World War II. The closing message that opens the yearbook speaks to the magnitude of that moment, and of war and peace. I wonder what the author who wrote the message would say about this nation’s quest for peace, considering all the wars, from Korea and Vietnam to Iraq and Afghanistan, it has mounted since 1944 (not to mention all the non-wars of US imperial machinations). The author also lauds the school for non-discriminatory practices, which is interesting to juxtapose to the fact that at the very time of its writing, Black men like Carmen’s then-future husband were fighting in a segregated military, and her daughter, Umi, would go on to integrate her junior high school nearly 20 years later.

My grandmother was a witty and social person and although toward the end of her life she suffered from Alzheimer's, she never lost her wit and could recall details from her past. When I interviewed her in 2007, she said: “I went to Edward W. Stitt Junior High School and from there I graduated and went to George Washington High School where the classes were harder but the teachers were nicer. But those kids were terrible!...George Washington was up on Edgecombe Avenue...it was way uptown...we used to take an elevated train up to George Washington, Charmaine, Lilla, Glenna, myself...” You can see photos of Charmaine, Lilla, and Glenna in the Carmen album in this exhibition. She was friends with those women until she passed 10 years after that interview.

The yearbook also leaves me with this question: Who is Elaine Mohammed? The etching around her photos implies she was a friend of my grandmother’s and her name indicates that she or her family were most likely Muslim. Were they members of the Nation of Islam that had been founded in the 30s or were they are part of Sunni Muslim communities like those established by Shaykh Dawud Faisal and Mother Khadijah in the 20s? Were they Ahmadi Muslims who read the Muslim Sunrise or were they members of the Moorish Science Temple?