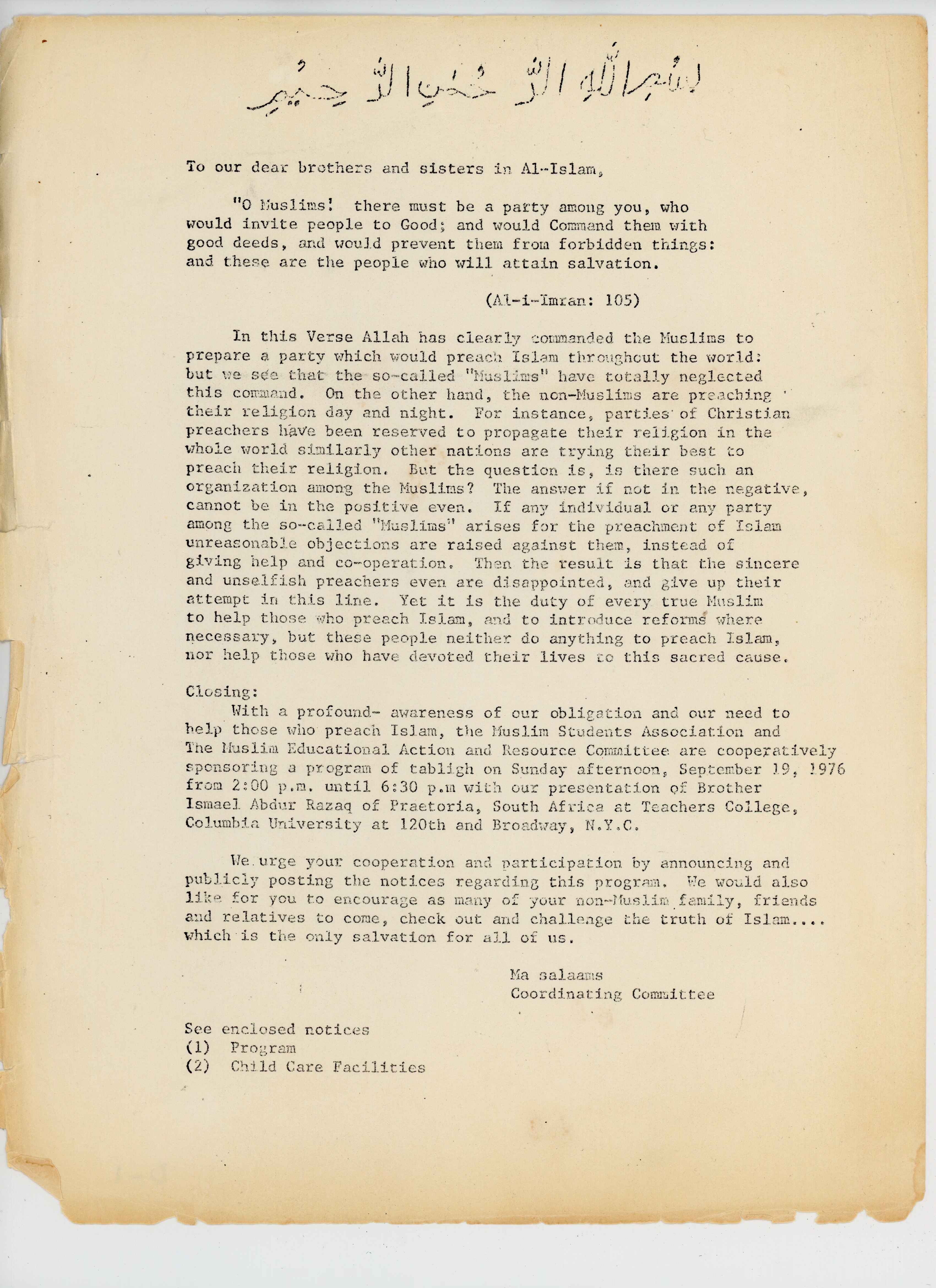 Notes: On this event, Umi explained: “We (M.E.A.R.C.) had a brother from South Africa, Ismael Abdur Razaq, which to this day we wonder what happened to him. He was over here giving dawah by the MSA and we were able to befriend him. And we had a BIG program at Columbia University in which my mother came, her friend Seymour, my Uncle Norman...Aunt Eleanor, my cousin Akua. All these people came and Ismael was very, very charismatic; like people talk about Ahmed Deedat, he sort of preceded Ahmed Deedat.

He was living in exile from South Africa, living in Egypt, and somwhere in there he disappeared, we are still trying to figure it out, we think he was killed, but we don’t know...he was exiled from the apartheid goverment because he was an advocate against racism...we had him speak with [Bed-Stuy Brooklyn community activist] Al Van, we had a meeting there and those Afrocentric brothers who were not muslim were impressed by Br. Ismael because he could speak in a language they could understand, show how Islam could enhance a community, improve a community and still respect the people’s culture and race…‘cause you know there was still the issue of racism among Muslims.”

M.E.A.R.C. (Muslim Educational Action and Resource Committee) was perhaps the first of the many organizations started by the crew of activist sisters Umi rolled with. It was established circa 1975 by sisters who had attended Islamic studies classes with Dr. Sulayman Dunya and led by Aliyah Abdul-Karim and Kareemah Abdul-Kareem. M.E.A.R.C. held “dawah luncheons” or dinners which were smaller affairs and large events like this one held at Columbia University. For M.E.A.R.C .’s very first event the invited speaker was Hajj Wali Akram, who historian Rasul Miller calls one of the trailblazers of “orthodox Islam in the 20th century.” Akram founded the First Cleveland Mosque in Cleveland Ohio in 1937. He was an elder at the time of the M.E.A.R.C. invited and was invited, according to Sis. Kareemah, because he was closer in age to the parents of these new converts and could assure these parents about Islam. M.E.A.R.C. coordinated the event and I’m fairly certain that is Umi Arabic handwriting on the flyer. M.E.A.R.C. was able to secure the space with the help of the Columbia University Muslim Students Association.